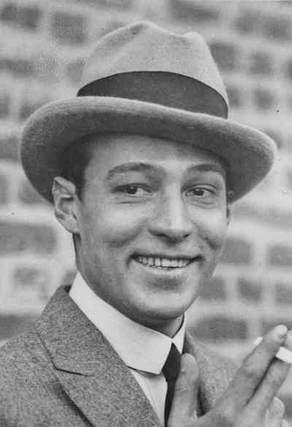 Although his eyes glimpsed bitterness and sadness, They saw a dream that few folk ever see - " In Memoriam -Photoplay Magazine 1926
Traveling across country promoting The Son of the Sheik before the general release, Valentino arrived in New York during a terrible heat wave.  Struggling with the recent attacks by a craven reporter in Chicago and suffering from ulcers, the pressures of promoting his film and still heartsick over the failure of his marriage to Natacha Rambova, Valentino seemed not to care for his own well being.  He was seen in speakeasies and clubs through the wee hours of the morning, in pain from his ulcers he still did not allow himself the rest he needed so terribly.
On August 15th, Valentino was stricken in his hotel room at the Ambassador.  Rudy's valet calls his manager, George Ullman, who arrives in Rudy's suite to find him doubled over in pain and spitting up blood.  Doctors are called and he is rushed to the Polyclinic Hospital in a private ambulance.
X-rays confirm the diagnosis of a large perforated ulcer in the abdominal cavity surrounded by several other ulcerated areas.  There is also infection which threatens to spread rapidly if surgery is not performed.  Surgery is performed several hours later and the entire abdominal cavity cleansed and closed up.  Valentino is taken to a private room where he awakens from the ether, vomits blood, is feverish and groans in pain.
August 16th-20th pass with Valentino still in dreadful pain, feverish and unable to eat.  His strength is sapped, he is being fed via injections of vitamins in order to try to keep what little strength he has, up.   On the morning of the 20th, Valentino awakens in considerable pain and unable to breathe, he is given ether and he sleeps   Later on in the day the Doctor attending comes to check on his dressings and the drains, Rudy smiles, for the first time he is not in pain.  The Doctor knowing better, sees this is a very bad sign.
Valentino's condition changes dramatically in the space of a few hours.  He is now in grave danger.  He is feverish, panting for breath and moaning every time he does manage to take a breath.  Rudy's abdominal cavity is now swollen and bruised and blotchy looking.  The Doctors take further X-rays and confirm their worst fears, pleurisy has set in and all hope for a recovery is lost.  The attending nurses fight back their tears as they tenderly care for the dying man. Painkillers are administered so Rudy can sleep.  Weak and in
continual pain, Valentino suffers his agonies in silence.  With the ever changing new reports, crowds gather outside the hospital, eager for any news of the stricken star.
On the evening of the 22nd his trial really begins.  His feverish temperature holds steady, his breathing is labored, he moans in pain and is made aware of gravity of his situation.  Rudy agrees to see a priest and makes confession is given absolution but is too weak to take communion.
Early on the morning of the 23rd Valentino is given morphine to ease his discomfort, it helps for only a little while.  Valentino grasps the rails of his bed, wracked with pain, however weak, he still fights on with clenched teeth.  Moans escaping his lips only when he can no longer hold his composure.  His eyes closed his voice softly whispers "Maman..."  More morphine is administered which relieves Valentino only the briefest respite from his terrible agony.
As the sun rises, the heat of the day already begins to be oppressive. More crowds have gathered outside the hospital and can be heard from Rudy's open window on the 8th floor.  Instinctively they seems to know the end is near.  Dr. Meeker tries to close the window blinds, but Valentino stops him in one of his last lucid moments.
Valentino spends his final hours in a comatose state, his body writhing in pain from the massive infection.  The Doctors can do nothing more for him but wait for the inevitable.
George Ullman weeps in the corridor.  The Priests administer Extreme Unction to the dying man.
Emaciated, Valentino would be almost unrecognized by the crowds outside, so great has the battle for his life changed his countenance. Just before noon, Rudy is attended by Dr, Meeker, who sponges Rudy's face and neck of the sweat streaming from him.  While the Priests kneel at the foot of the bed praying for Rudy's immortal soul, Rudy moans deeply and painfully for one last time, he spasms and his body stiffens wracked with pain.  His eyes flutter open for the briefest moment, his head falls back on the pillow at rest.
Valentino has now truly become immortal.